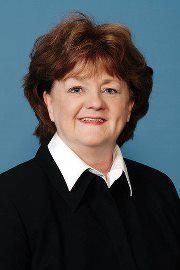 There's much to see here. So, take your time, look around, and learn all there is to know about us. We hope you enjoy our page.

The Beadle County Republican Women have enjoyed many activities the last several months. We always enjoy working the Republican Building for the South Dakota State Fair in Huron during the days prior to Labor Day. Lots of fun meeting and greeting and talking with all the SDGOP constituents across the State and Region—and conversion of some minds! It is always enjoyable to mingle and work with our wonderful elected Republican officials in the State. Each of them contributes so much to our party and to our South Dakota citizens.

In January a favorite speaker and program was an issue Governor Noem deems important—immigration in South Dakota. The Chairman of the Korean Association of South Dakota, Lah May Paw Soe was our guest speaker. In today's political arena, the conversation surrounding the number of immigrants and refugees entering the US has become a hot topic. So it was appropriate to begin our year with information and history of the Karen in our State and our Community.

Myanmar (Burma) a former British colony, is located in southeastern Asia and nestled between Thailand, India and China. When World War II ended in 1945, so did the Japanese occupation in Myanmar. The Korean people felt they were entitled to their own independent, sovereign state, but not so. The political unrest in Myanmar continued for years and finally resulted in a bloodless military coup d’état in 1962, resulting in a one-party socialist military dictatorship. This dictatorship led attacks in civilian areas, burned villages, destroyed food supplies, laid land mines in public areas, and shot fleeing civilians. They have been accused of sexual violence, forced (slave) labor and the use of child soldiers in their campaigns. To escape the violence of many decades thousands of refugees sought safety in the jungles of Thailand, leading to refugee camps. Lah's full story is hypnotic and worth hearing, much as was the Human Trafficking Program at our SDFRW Board Meeting.

We are working with Megan Assman to have her program presented in Huron this spring!

BCRW provided desserts to our County Firefighters to thank them for their great work and delivered donations to the Berakhah House in Sioux Falls to help Veterans set up homes.

Three of our BCRW members attended the SDGOP Central Committee Meeting in Pierre, the SDFRW Board Meeting in Pierre and we continue our work with the County Party and attending weekly Coffee with Our Legislators on Saturday mornings.

We continue our community work in an effort to increase membership.